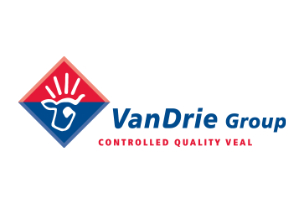 Family business VanDrie Group is the global market leader in veal and the largest producer of calf milk. When in the early 1960s Jan van Drie bought his first calf for fattening, he could not have foreseen how his company would expand into a worldwide business consisting of no less than 25 companies. Veal integration is VanDrie’s major aim: every step, from the purchase of a new-born calf to the sale of veal is part of a chain, which is carried out inhouse. Processes are organised in such a way that the company is able to deliver top veal products according to the customers’ demands and wishes. VanDrie is also one of the partners in the CCC program CarboKinetics.

The core business of VanDrie is to buy two-week old male calves from dairy farmers, take them to controlled farms, where they are raised, fed and cared for until they are ready to go to the slaughterhouse. During this time the calves remain the property of VanDrie. R&D Manager Wiebe Mulder explains the integral chain that connects all processes of the company: ‘We are in control of all aspects of this chain: we supervise the way the farms care for the calves and we deliver feed that is produced by our own feed plants. Once the calves are old enough to be slaughtered, we arrange their transport and process them in our own slaughterhouses. Finally, it is our responsibility to deliver top veal to our customers.’

One of the major concerns during the time the calves are cared for in controlled farms is their health. Mulder: ‘Calves are like children. As soon as you take a healthy child to a day-care centre it catches cold. And its parents as well. The same goes for calves when you put them together. That is why we devote a lot of attention to the circumstances under which they are kept. First right after birth at the dairy farms, later at our controlled farms. This means we make sure they are given the right feed and are kept in stables with just the right temperature, for instance. We do everything to make sure the calves are in excellent condition.’

New knowledge to apply in practice

One of the reasons VanDrie joined the CCC program CarboKinetics is their concern for the calves’ health. Mulder: ‘We are participating in all six projects of this program, one of which is focused specifically on calf feed. We are also interested in the projects researching food interventions to reinforce the health of children by using prebiotics. It would be a great step ahead if this knowledge could also be applied to animals.’

Another reason for VanDrie to join CarboKinetics is the worldwide challenge to reduce the use of antibiotics. Mulder: ‘This is a major concern in our company. We hope the research into the addition of FOS and GOS to animal feed has a positive effect on the resilience of calves against infections. It is our responsibility to produce healthy and safe food. Working with universities means that new knowledge about the effects of dietary interventions are researched in an evidence-based way. This hopefully leads to practical applications which we can use in our own company in the long run. As a family business we also appreciate the transparent and open way everybody participates in the program.’

BioBridge acknowledged by Province of Groningen

Science in focus: Biochemistry of complex glycan depolymerisation by the human gut microbiota