Indigestible carbohydrates are good for our health! 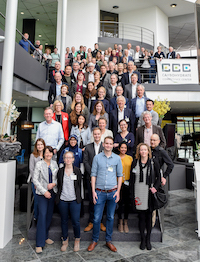 “Carbohydrates are bad”, is a daily message in the media. Especially indigestible carbohydrates however, are essential for the health of humans and (other) animals. This point was emphasized during the annual symposium that the Carbohydrate Competence Center (CCC) organized on 12 April in Groningen. “Today we heard the other side of this story,” said Bert Jansen, member of the Agri & Food Top Team and CEO of AVEBE.

Attendants at the event were presented with a wide range of scientific insights. During the morning program of this well-attended symposium led by Lubbert Dijkhuizen, scientific director of CCC and professor of Microbiology at the University of Groningen, a group of enthousiastic young scientists presented their research on carbohydrates in twelve short pitches in pecha kucha style as well as on posters. Their research projects are part of two new CCC programs: CarboKinetics and CarboBiotics. You want to have a look at the posters?
click here.

All these research projects strongly focus on the so-called indigestible carbohydrates . They may play a major role in reducing antibiotic use for humans and animals, for example. Or provide a useful addition to infant formula used in bottle feeding for babies, or special food for the elderly or recovering patients. Accurate analysis of the carbohydrate oligosaccharide composition of breast milk has also yielded promising results that can be applied in new products by the food industry.

Prebiotics and probiotics in the spotlight

One of the central themes within the research programs of CCC is about the relationship between indigestible carbohydrates (the so-called prebiotics) and the beneficial bacteria in the intestinal tract (the probiotics). For example, ongoing research is being done whether adding a combination of these prebiotics and probiotics to food can contribute to the reduction of typical Western disorders such as type 2 diabetes and obesity. Fundamental and innovative CCC research increasingly leads to promising practical applications.

The health effects of breast milk

Keynote speaker Dr. Evelyn Jantscher-Krenn, Department of Obstetrics and Gynecology Medical University of Graz discussed in detail the possible health effects of indigestible carbohydrates in breast milk. She is currently engaged in the development of a research program that investigates the role of these human oligosaccharides during pregnancy. Previously, she has done pioneering research into the influence of carbohydrates in breast milk on various aspects of health.

The journey of the lemon

The second keynote speaker, Dr. Karin Meyer Jansen, CP Kelco Copenhagen, presented how industry develops new carbohydrate products based on pectin: from lemon peel to pectin application. Pectin can then be used in, for example, foods and medicines. Interesting in the light of the CCC theme of carbohydrates and health is the fact that pectin can be used not only to thicken jam, but also to feed the probiotic bacteria in the intestinal tract.

A good tradition during the CCC Open day are the Rudy Rabbinge awards for best pitch and best poster. This year Melany Rios Morales (UMCG) performed the best pitch and Martin Beukema (UMCG) presented the best poster. Congrats! The day ended with the presentation of the CCC final report of CarboHealth. Prof. dr. Sybrand Poppema, member of the CCC Supervisory Board and chairman of the Executive Board of the University of Groningen, and Bert Jansen both received the first copies of the final report on CarboHealth. This report contains the results of five years of research by universities in collaboration with the companies involved. This program will deliver more than 25 scientific articles, including five dissertations. The concrete results lead to new research projects and future practical applications in the areas of nutrition, health and animal welfare.

CarboBiotics: New projects on reducing the use of antibiotics by humans and farm animals

A look back at the CCC Autumn Symposium